In August 2016 Eden Arts proudly launched a new event - the Mt Eden Chamber Music Festival. This has become an annual event on the Mt Eden Village calendar and takes the form of three one-hour early evening/afternoon concerts in the heart of Mt Eden over the course of a weekend, featuring some of the best professional chamber musicians in the country.

The Chamber Music Festival is a welcome supplement to our musical matinees which have been an annual part of the Eden Arts programme for a long time with the aim of supporting young emerging musicians.

Now in its sixth year, the Festival has welcomed a range of eminent musicians from across New Zealand including NZ String Quartet, NZ Chamber Soloists, NZBarok, Aroha String Quartet, Auckland Piano Trio, soprano Amelia Berry, bass Wade Kernot, pianist Rosemary Barnes and clarinettist Peter Scholes, among others. Thank you to all who have supported this boutique music event so far and we look forward to seeing you again later in the year!

MORE DETAILS TO BE ANNOUNCED SOON!

Simeon Broom grew up in Mt Eden and began the violin at the age of 4 years. He completed Performance Violin studies at Auckland University with Mary O’Brien, during which he won the inaugural University Concerto Competition. Simeon moved to Germany on a Scholarship and studied at the Hochschule für Musik, Düsseldorf. In 2004 he was finalist in the ‘Young Musicians’ Competition New Zealand’, and has performed as soloist with orchestras both in New Zealand and in Germany. In 2021, Simeon will perform as soloist with the NZSO, in Vivaldi & Piazzola’s ‘Four Seasons’.

In 2008, Simeon completed his Masters at the Guildhall School of Music and Drama, studying with David Takeno and Jack Glickman. He was winner of the Sonata Competition (with Rachel Church) at the North London Music Festival. He has played in orchestras such as the Royal Opera House (Covent Garden), English National Opera, City of Birmingham Symphony Orchestra, the Bergen Philharmonic and the Sydney Symphony, before taking up his position in the NZSO.

Simeon is a passionate chamber musician and has toured for Chamber Music New Zealand. He was a core player in the inaugural Mt Eden Chamber Music Festival in 2016, performing in all three concerts in an intensive programme of German Romantic music as well as bringing his professional colleagues to the stage in a variety of musical ensembles, including the Aroha Quartet.

Simeon has been artistic director of this festival since its conception. Inspired by the high calibre European music festivals he experienced while living overseas, his long held dream of bringing a similar event to Mt Eden came to fruition in 2016. The restoration of the Mt Eden Village Centre Church meant that an ideal chamber concert venue was now available and this, coupled with the backing and event organisation provided by local arts trust Eden Arts, has led to a hugely successful annual festival which has already become a firm favourite on the local arts calendar. 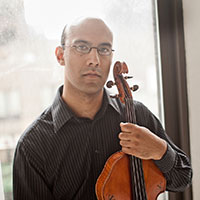 Violist David Samuel is a Professional Teaching Fellow and the Convenor of Classical Performance at the University of Auckland. From 2015-2020, he was the Associate Principal Viola in the Auckland Philharmonia Orchestra and at the end of this year, he will relocate to San Francisco to join the Alexander String Quartet as their new violist. He was previously the violist of Ensemble MidtVest in Denmark and was the founding violist of the Afiara Quartet. During his eight year tenure with the Afiara Quartet, Mr. Samuel performed hundreds of works for string quartet in more than 400 concerts worldwide. In addition to being the first ensemble ever to receive theYoung Canadian Musicians Award, the Afiara Quartet was a top prize winner at the ARD International Music Competition in Munich, the Banff International String Quartet Competition and the Concert Artists Guild Competition.

Mr. Samuel has performed at Wigmore Hall, Berlin Konzerthaus, the Esterházy Palace, Carnegie Hall, Lincoln Center, The Kennedy Center, Library of Congress, at the headquarters of both LinkedIn and Facebook, and on "The Late Show with David Letterman". He has performed chamber music with Robert Mann, Pinchas Zukerman, Atar Arad, Michael Tree, Colin Carr, Marc Johnson, Joel Krosnick, Sergio Azzolini, James Campbell, Jörg Widmann, and members of the Alexander, Cecilia, Danish, Emerson, and Juilliard String Quartets. Mr. Samuel has recorded for CPO, Dacapo, Foghorn Classics, and Naxos, and has worked as a producer most recently for a recording of Mozart chamber music with the Alexander String Quartet and pianist Joyce Yang.

A dedicated teacher, Mr. Samuel enjoys a passion and commitment to education. He has given hundreds of educational concerts and workshops internationally and has been a faculty member at the University of Stavanger, the San Francisco Conservatory of Music Preparatory Division, and has held residencies at San Francisco State University, The Juilliard School, The Glenn Gould School, and the University of Alberta.

Mr. Samuel received his Bachelor and Master of Music as well as an Artist Diploma from The Juilliard School. He also received an Artist Certificate in Chamber Music from the San Francisco Conservatory of Music. His principal teachers were Paul Hersh, Henry Janzen, Michael Tree, and Karen Tuttle. 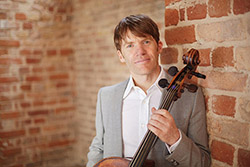 Winner of the TVNZ Young Musicians Competition and the National Concerto Competition of New Zealand, James has performed as soloist with all of New Zealand’s leading orchestras. He worked regularly over the last 15 years with many of Europe’s established baroque orchestras including Akademie für Alte Musik Berlin, Concerto Köln and as principal cello of Al Ayre Español.

James also collaborated over many years with renowned dance company Sasha Waltz and Guests, performing from the Bach cello suites in 50 performances worldwide of the work Gezeiten. He has felt fortunate to have performed in most of Europe's leading concert halls and appears in recordings that have been released by SONY, Harmonia Mundi, Winter & Winter and Challenge Classics. 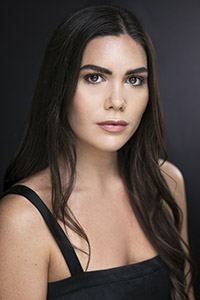 A graduate of the Manhattan School of Music and the New Zealand School of Music, Amelia Berry made her debut with New Zealand Opera in 2013, singing Zerlina in Don Giovanni. She has performed throughout Australasia, the United States and Asia, in roles such as Musetta La bohème, Cunegonde Candide, Frasquita Carmen, Yum Yum The Mikado, Johanna Sweeney Todd, Clorinda La cenerentola, First Lady The Magic Flute, Carlotta The Phantom of the Opera, Corinna Il viaggio a Reims, Annio La clemenza di Tito, Jenny Aufsteig und Fall der Stadt Mahagonny and Giulietta I Capuleti e i Montecchi.

Concert engagements within New Zealand include performances with the Auckland Philharmonia Orchestra, Christchurch Symphony Orchestra, Orchestra Wellington, Orpheus Choir, and Auckland Opera Studio. Other highlights include singing at the famed 54 Below in Manhattan, featuring at Rotorua Lakeside, appearing with Scottish Opera for their collaboration with the Commonwealth Games, and a dedicated episode of the Dare to Dream documentary series on TVNZ.

Amelia won the 2011 Napier Aria, the 2010 New Zealand Aria, the 2009 Wellington Aria and the 2008 Dunedin Aria. During the 2020/2021 season she will return to Orchestra Wellington and the Auckland Philharmonia Orchestra, debut with Wellington Opera and Bach Musica, and perform recitals around New Zealand with some of the country’s leading pianists. 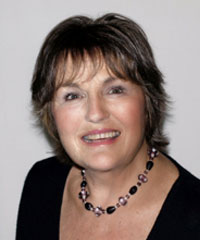 Born in Lower Hutt and known nowadays more for her collaborative piano work, Rosemary received early acclaim as a soloist for her radio, television and concerto appearances. Awarded an Arts Council bursary, she studied in London with Franz Reizenstein (Royal Academy of Music), Lamar Crowson and David Wilde. Her interest in languages led to 27 years in London, working mainly with singers, at English National Opera (music staff 1980-88), at the Royal College of Music, and with Glyndebourne Touring Opera, BBCTV, Musica nel Chiostro in Italy and Opera Northern Ireland. She performed at the Wigmore Hall, South Bank, Usher Hall in Belfast and on BBC Radio 3. From 1993-99 Rosemary led the Postgraduate Opera Diploma at the University of Auckland.  An official collaborative pianist at the Gisborne International  Music Competition since 1994, her performances include concerts with Dame Kiri Te Kanawa, Sir Donald McIntyre, Lesley Garrett, Pene Pati, Amitai Pati, Emil Chudnovsky (violin) and Robert Aitken (flute) and three CDs for the Continuum label. In 2000, Rosemary was awarded an MNZM for services to music.

The NZSQ perform over 80 concerts each year at home and abroad, alongside equally as many education concerts, workshops, and masterclasses. Recent international tours have included performances in Canada, the USA, the UK, Germany, The Netherlands, China, Mexico, and Australia and they have appeared at London’s Wigmore Hall, the prestigious Frick Collection in New York and in Washington’s Library of Congress. For Naxos, the NZSQ has recorded the complete Mendelssohn, Brahms and Berg quartets, and Brahms’ clarinet and string quintets.

The ensemble has been Quartet-in-Residence at the New Zealand School of Music at Victoria University of Wellington since 1991 and in 2019 celebrated 25 years running the Adam Summer School for Chamber Music. Violinist Helene Pohl and violist Gillian Ansell are co-artistic directors of the biennial Adam Chamber Music Festival in Nelson. Gillian, Helene and cellist Rolf Gjelsten have received MNZM honours for services to music in New Zealand.

Helene Pohl studied at the Musikhochschule in Cologne, with members of the Cleveland Quartet at the Eastman School of Music and at Indiana University with Josef Gingold. She was first violinist of the prize-winning San Francisco-based Fidelio String Quartet before joining the NZSQ in 1994. In 2001 she became Artistic Director, with Gillian Ansell, of the Adam Chamber Music Festival.

Helene plays a 1730 violin made by Pietro Guarneri in Venice.

Monique studied at the Australian National Academy of Music and at the Yong Siew Toh Conservatory of Music in Singapore. She has twice been a finalist in the Asia Pacific Chamber Music Competition and has participated in chamber music programmes and festivals in Europe, Asia and Australia.

Following studies at the Royal College of Music in London and at the Musikhochschule in Cologne, Gillian worked as a professional player in London before becoming a founder member of the New Zealand String Quartet in 1987. She was second violinist for two years before taking up the position of violist with the group. In 2001 she became Artistic Director, with Helene Pohl, of the Adam Chamber Music Festival.

Rolf studied cello in North America with James Hunter and Janos Starker, as well as chamber music with the LaSalle, Hungarian, Vermeer, Cleveland and Emerson string quartets. He played professionally with the Berlin Symphony, the Laurentian Quartet and New York Trio before coming to New Zealand. He has a doctorate from Rutgers University and has played with the New Zealand String Quartet from 1994.

Rolf plays a 1705 Francesco Gofriller cello made in Venice.